This handed the Pretoria side their second title in as many years, but this defence was in doubt until five minutes from time in a highly entertaining match worthy of a final and played by the best two teams in the competition.

The champions held their nerve better in the second half and while trailing 19-17 at the break, continued to use their expansive game to good effect, scoring six tries in the second stanza.

The home side dominated the middle part of the match through their pack and their rolling mauls. However, the greater flexibility of the Vodacom Blue Bulls attacking arsenal proved the difference in the end.

Winger Stravino Jacobs was again instrumental and his brace of tries took his overall tally of tries to seven in the competition and he  finished top of the try-scoring pile. 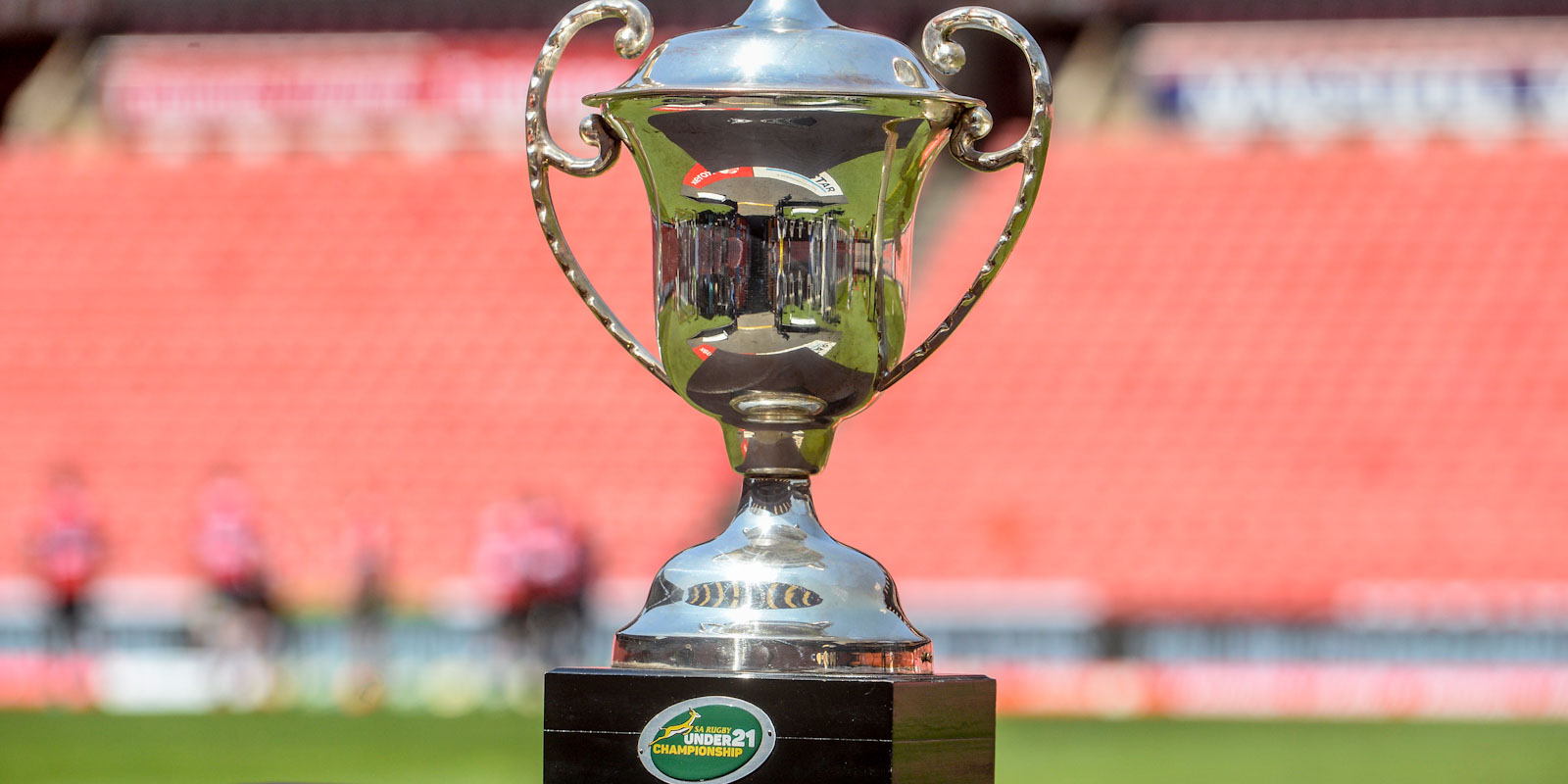 The SA Rugby U21 Championship trophy

Jacobs scored the first try of the match, on the back of a strong start by the Pretoria outfit. Their first serious attack yielded results after the home side were caught offside and fullback Richard Kriel kicked a fairly easy penalty goal. He added the conversion of Jacobs’ first try.

The left wing busted through two defenders, with his pack doing great work leading up to the first try of the match. The Pretoria side made good ground through the pack and when it was swung wide again, that Jacobs pounced.

The defending champions were on fire early on and unlucky not to score again following a blindside break by scrumhalf Bernard van der Linde. It yielded massive yards, but the final pass went astray and the opportunity lost.

That spurred the young Xerox Lions into action and they attacked though a very effective maul. Once that got the needed momentum, flanker Sibusiso Sangweni was worked into a huge gap and he scored with a swallow dive under the sticks. Centre Luke Rossouw kicked the conversion and was on hand to do so again less than a minute later. 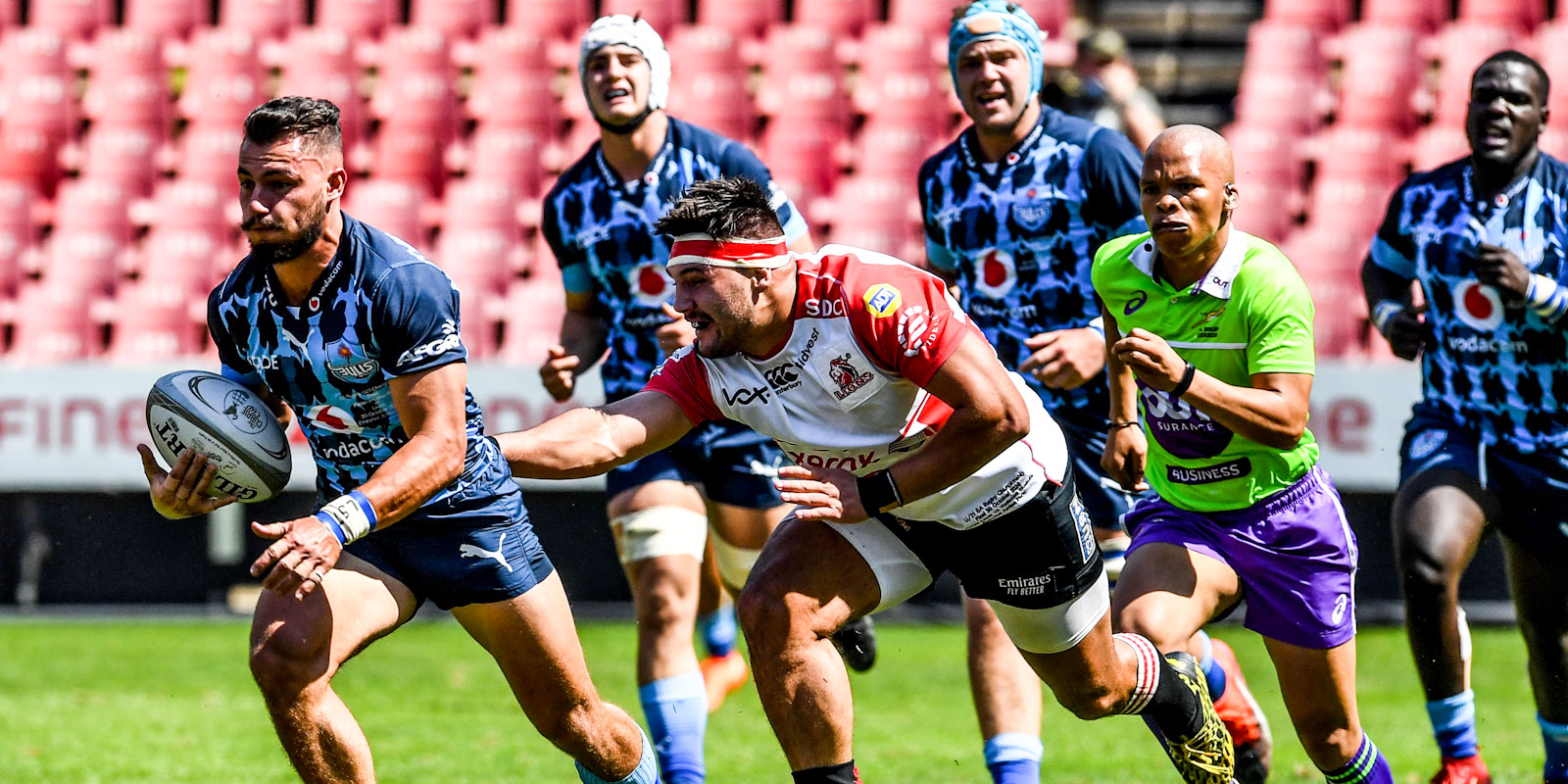 Xerox Lions winger, Ngia Selengbe, regathered the resulting kick-off and set off on a run that was halted only 20 meters from the Vodacom Blue Bulls line. The home team then worked the numbers created and lock Cal Smid was on hand to take the final pass to dot down.

That score suddenly pushed the home side into a 14-10 lead after they had hardly any possession. Rossouw then missed a penalty attempt and the score board personnel could catch their breath at the first water break after 20 minutes of play.

The visitors were still flustered after the mini-break and failed to use their possession to their advantage. Instead, it was the young Lions who scored a third unanswered try, again through good work from their pack.

No 8 and captain, Francke Horn, was at the back of a strong maul and he benefitted from some fairly average maul defence by the visitors and at 19-10, the momentum was pretty much in the home side's favour.

The pendulum swung back towards the middle though when Van der Linde scored after 32 minutes. The Vodacom Blue Bulls had a five meter scrum and from that strong position attacked through the backs, with inside passes finding supporting forwards. The scrumhalf nipped over from a ruck close to the line, which saw Kriel slotting over his second conversion to cut the lead to two points. 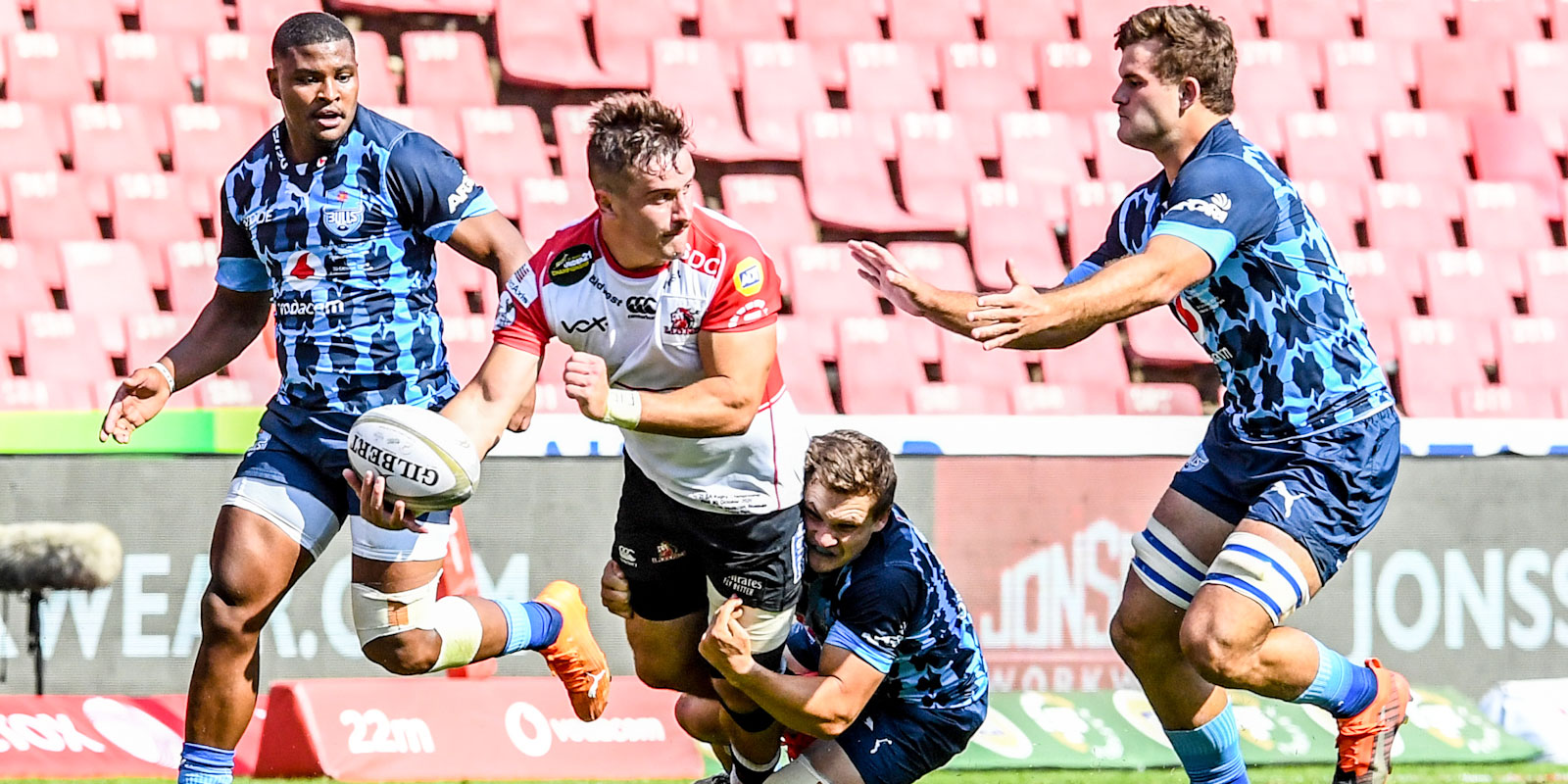 The Vodacom Blue Bulls had some problems to contain the Lions’ maul and following an illegitimate effort to stop it, hooker Janco Uys was yellow-carded by referee Paul Mente. They did well to contain the Lions pack in the final minutes up to half-time and even had the chance to grab the lead against the flow of play when Kriel attempted a long range penalty on the halftime hooter, but pulled it to the left.

The home side extended their lead early in the second half with a fourth try, this time the result of sloppy breakdown play by the Blue Bulls. A counter-attack proved disastrous for the men in blue as they spilled the ball and winger Prince Nkabinde raced in from 35 meters unopposed. Rossouw kicked a great touchline conversion for a 26-17 lead.

With their title defence aspirations slipping away, the Blue Bulls had to strike back quickly and did so thanks to a strong backline effort. Diego Appollis had a strong run in the midfield and his final pass found Jacobs who scored his second in the corner. David Coetzer, who took over the kicking duties from an injured Kriel, converted from the touchline to make it a two point game once more.

Coetzer then pulled a long range effort to the left, but the next scoring act was spot-on. 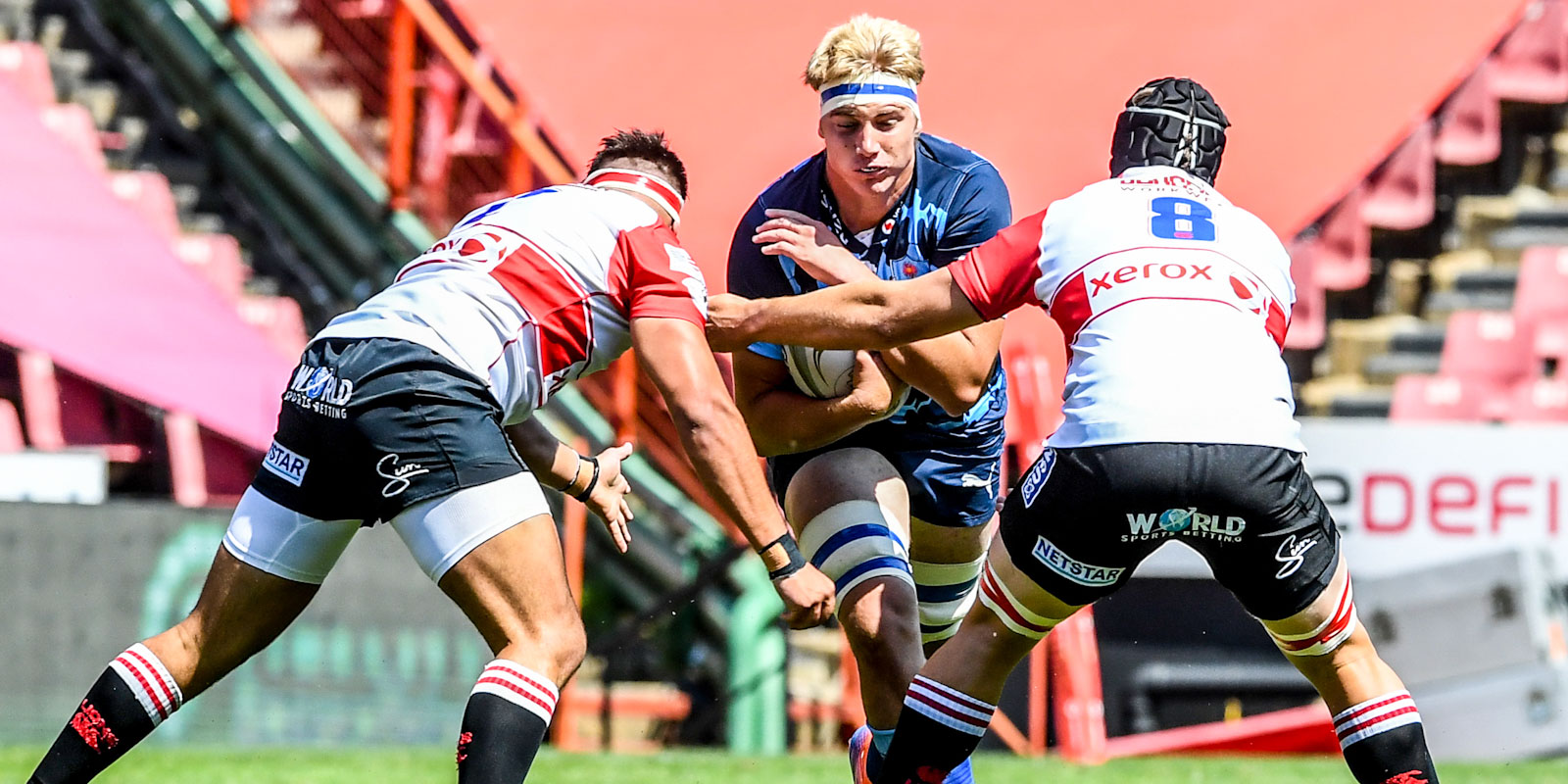 Janco Swanepoel on the drive.

The Vodacom Blue Bulls have not outscored their peers in the try-scoring stats of the tournament for nothing during the last month and their fourth in the match, and 26th overall, was perhaps the best of them all.

Replacement scrumhalf, Keagan Johannes, broke wide from a scrum and then kicked ahead to regather himself for a spectacular individual effort. That five pointer handed the lead back to the Pretoria side for the first time since the opening ten minutes and at the second water break the visitors enjoyed a 29-26 advantage with 20 minutes to play.

Uys then turned from villain to hero with a try after 64 minutes. A wicked bounce of the ball from an up-and-under had the home back three in deep trouble as it found a charging Sebastian Jobb. The winger ran hard and the final pass reached Uys who scored under the sticks, leaving Coetzer an easy conversion and a 36-26 lead. 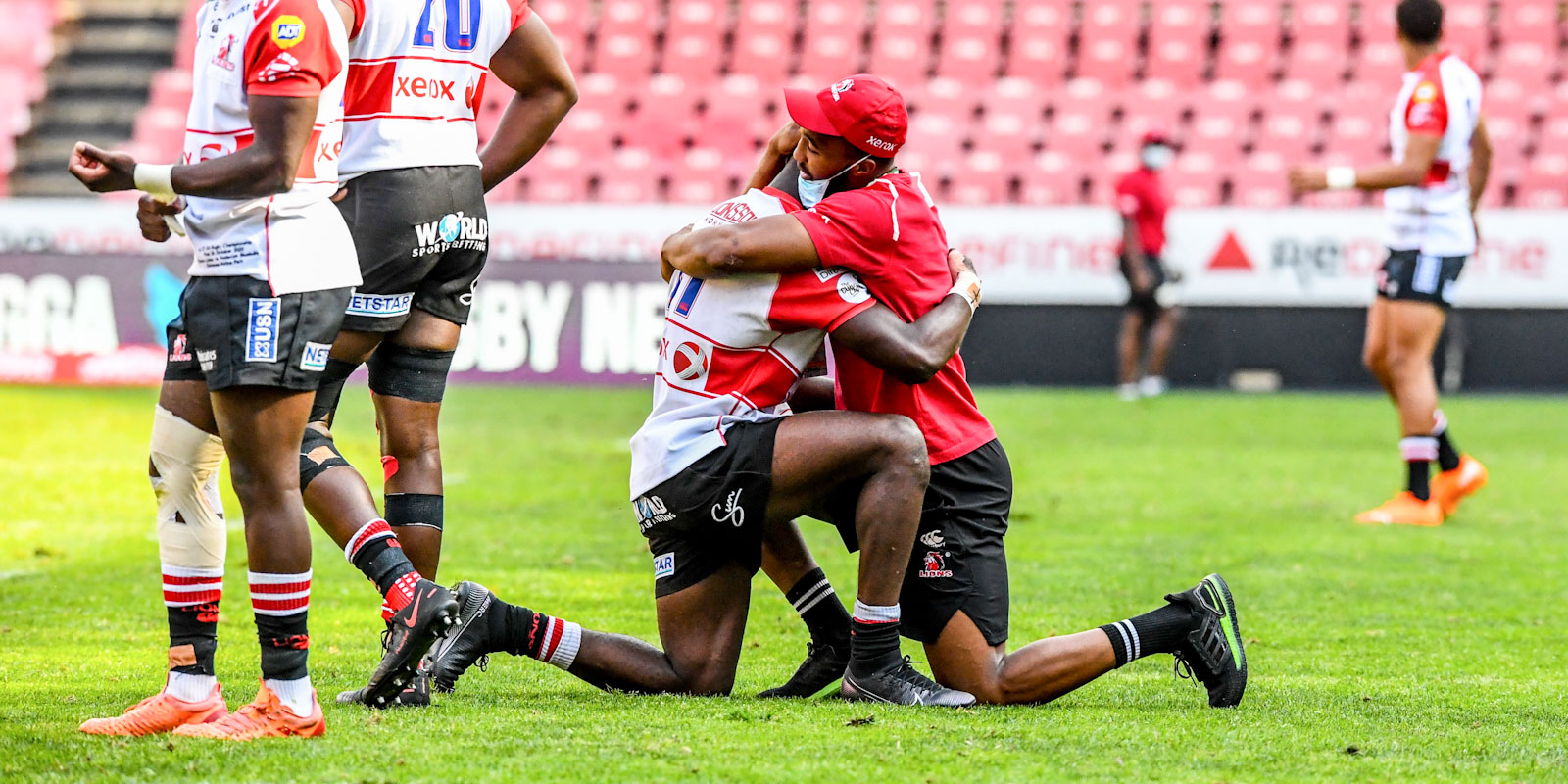 The Xerox Lions came to play though and Ebot Buma scored when the Lions went back to what was working all day, with the replacement prop crashing over after sustained pressure and yet another successful line-out drive.

Rossouw converted to cut the lead to three points and six minutes to play. The home side had to attack from deep and that proved fatal as a crunch tackle by Appollis then sealed the deal for his team.

The tackle dislodged the ball from a frantic Lions attack and replacement back David Kellerman grabbed the loose ball to race in for the match decider. With the Lions napping and desponded, replacement prop Jan-Henrik Wessels scored from a quick tap and Coetzer kicked the conversion for a 48-33 score line.

Springbok Rugby World Cup winning prop Trevor Nyakane will anchor the scrum in the only change to the Vodacom Bulls starting team for their outing against the DHL Stormers at Loftus Versfeld on Saturday.

Springbok loosehead prop Steven Kitshoff will captain the DHL Stormers in their Vodacom Super Rugby Unlocked encounter with the Vodacom Bulls at Loftus Versfeld on Saturday.