Two tries in the closing 14 minutes steered the Vodacom Bulls to an encouraging 24-9 victory against the Emirates Lions in their PRO14 Rainbow Cup SA opener at Loftus Versfeld on Saturday evening.

The match was tighter than the scoreboard reflected as the Vodacom Bulls held a narrow 10-6 halftime lead before breaking away in the final quarter to secure the win.

Jake White’s charges, however, will take comfort from the fact that they were disallowed three tries, which could have earned them a more rewarding win.

The first half was tight as both teams tried to find their rhythm with enterprising attacking play, but a combination of the solid defence and errors at crucial times saw only one try being scored compliments of Vodacom Bulls flyhalf Chris Smith.

Smith took advantage of a missed tackle and broke through another in the second minute to dash to the tryline and he slotted over the conversion to hand his team a 7-0 lead.

The Johannesburgers’ showed their intent on attack in the following minutes and continued to test the home side’s defence throughout the half, but they were unable to find cracks, and instead had to settle for two penalty goals by flyhalf Fred Zeilinga in the 12th and 17th minutes respectively.

The Vodacom Bulls managed to breach their neighbours’ defence for a second time in the 30th minute, but Janko Swanepoel (lock) was denied due to an earlier knock-on at a ruck.

The hosts, however, still had the last say in the half with a penalty goal by Smith, which extended their lead to 10-6. 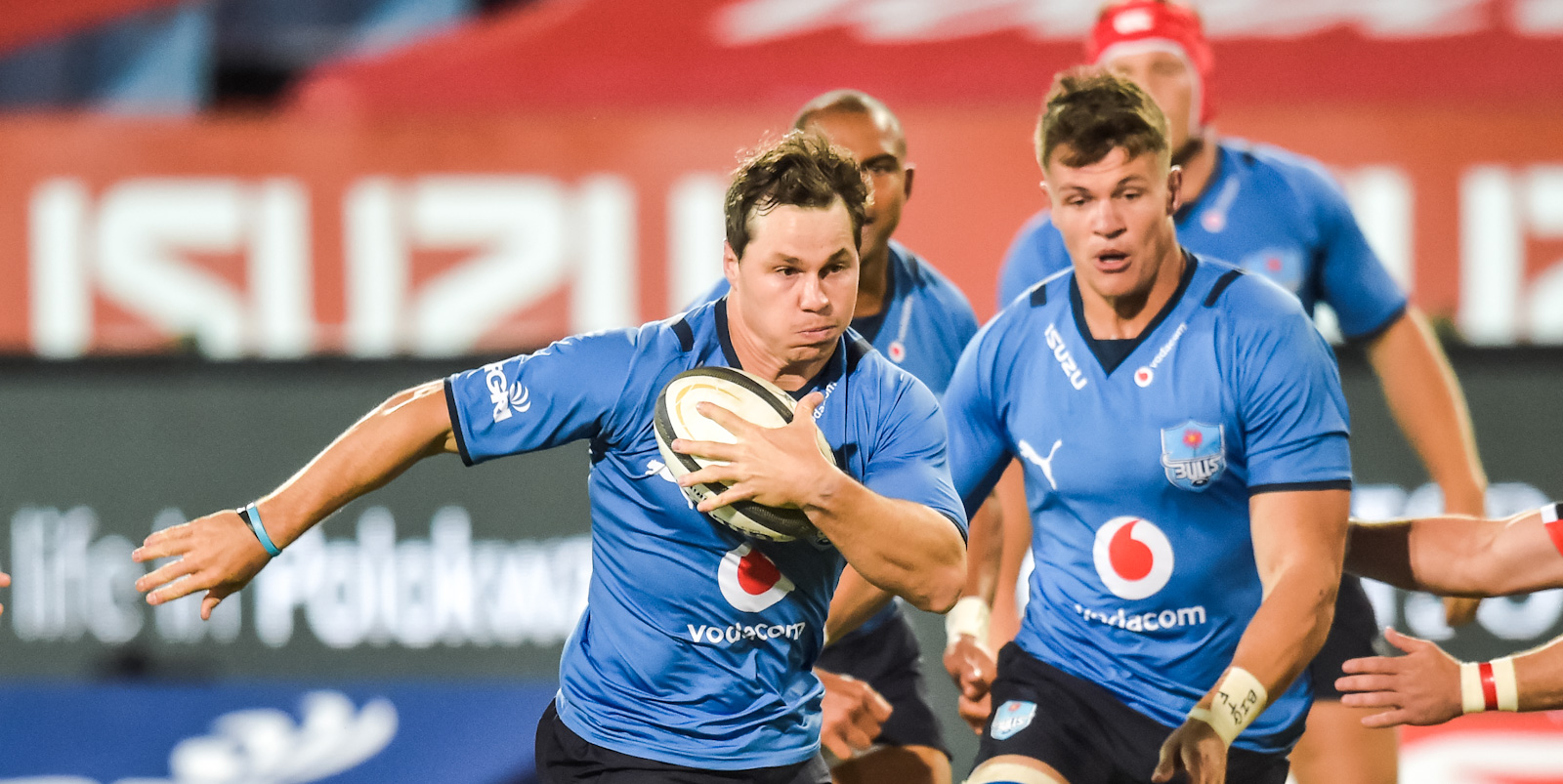 Vodacom Bulls flyhalf Chris Smith breaks through for his try

Zeilinga reduced the Emirates Lions’ deficit to one point four minutes after the restart with his third penalty goal, but the team found themselves under pressure several minutes later as EW Viljoen (replacement back) received a yellow card for a deliberate knock-down.

The hosts had a good opportunity to extend their lead almost immediately after as Stravino Jacobs (wing) touched down on the far side of the field, but they were once again denied, this time due to obstruction.

The Vodacom Bulls finally earned the rewards for their determined efforts on attack in the 66th minute as Zak Burger (replacement scrumhalf) dived over, and veteran flyhalf Morné Steyn added the extra two to hand the team a 17-9 lead.

The men in blue crossed the tryline for the second time in two minutes as Madosh Tambwe (right wing) gathered an accurate cross kick from Steyn, but this attempt was also disallowed as the lineout throw in the lead-up to the move was ruled to be skew.

The hosts, however, showed their fighting spirit until the final hooter and it paid off with their third try by Elrigh Louw (flanker) who forced his way through the defence with two minutes to go. Steyn’s conversion saw them deservingly secure the 24-9 victory.

There are four changes to the DHL Stormers starting line-up for their PRO14 Rainbow Cup SA encounter with the Emirates L...

Springboks Arno Botha and Trevor Nyakane have been drafted into the Vodacom Bulls' match day team that will host the Cel...

The two unbeaten teams in the PRO14 Rainbow Cup SA – the Vodacom Bulls and the Cell C Sharks – go head-to-head on Saturd...

The 2019 World Rugby Player of the Year Pieter-Steph du Toit will make his long-awaited return from injury for the DHL Stormers in the PRO14 Rainbow Cup SA opener against the Cell C Sharks at Cape Town Stadium on Saturday.

New-look back trio for Vodacom Bulls

The Vodacom Bulls welcome back a wealth of experience as Director of Rugby Jake White named his squad to battle the Emirates Lions at Loftus Versfeld on Saturday, with a new-look back-trio selected for their PRO14 Rainbow Cup SA opener.

Those who fear the pressure to win at any cost will see the South African teams creep back into their conservative shells in the PRO14 Rainbow Cup SA, would have been happy to hear the coaches speak on the eve of the competition’s kick off.

Provincial women’s rugby back with a bang

South Africa’s top domestic and international women’s rugby players will return to the field with a bang for the first time since 2019 when the Women’s Premier and First Divisions kick off in May and June respectively.

The PRO14 Rainbow Cup SA gets under way this weekend with the Cell C Sharks heading south to Cape Town to take on the DHL Stormers in the opening fixture of the double-round on Saturday.

Rainbow Cup SA: Sharks and Bulls on top in Round 1

The PRO14 Rainbow Cup SA got off to a flying start on Saturday afternoon with a drama-filled match in Cape Town when the Cell C Sharks edged the DHL Stormers 33-30, while the Vodacom Bulls defeated neighbours Emirates Lions 24-9 thanks to late surge in their evening encounter at Loftus Versfeld in Pretoria.

All the action from the Rainbow Cup SA openers

Missed any of the action from Saturday's opening round of the PRO14 Rainbow Cup SA? Here are all the highlights from Cape Town and Pretoria.

George Cronje, a former SA Schools star No 8, is enjoying every minute of his time at the SA Rugby Academy and says the experience has fuelled his motivation to dream big and become the best player he can be.

Walter Sisulu University (WSU All Blacks) and the Cape Peninsula University of Technology (CPUT) kept their perfect records in the FNB Varsity Cup intact on Sunday with convincing wins in round five of the tournament.

The winner of the 2021 Castle Lager Lions Series in South Africa will be the recipients of the first perpetual trophy in the history of the British & Irish Lions.

The 2019 World Rugby Player of the Year Pieter-Steph du Toit will make his long-awaited return from injury for the DHL Stormers in the PRO14 Rainbow Cup SA opener against the Cell C Sharks at Cape Town Stadium on Saturday.

Rainbow Cup SA: Sharks and Bulls on top in Round 1

The PRO14 Rainbow Cup SA got off to a flying start on Saturday afternoon with a drama-filled match in Cape Town when the Cell C Sharks edged the DHL Stormers 33-30, while the Vodacom Bulls defeated neighbours Emirates Lions 24-9 thanks to late surge in their evening encounter at Loftus Versfeld in Pretoria.