A monster penalty goal by Chris Smith, gave the Vodacom Bulls a hard-fought and deserved 17-14 win over South Africa 'A' in their Castle Lager Lions Series clash at Cape Town Stadium on Saturday afternoon.

Smith, who had replaced an impressive Johan Goosen minutes earlier, placed the kicking tee just inside his half and the ball snuck over the crossbar, but they all count and the Vodacom Bulls took the lead with less than five minutes left.

Goosen, on debut for the Vodacom Bulls, earlier made a sizeable mark on the game. The men from Pretoria were trailing by 14-0 at the break, but two interventions by their starting flyhalf saw Keagan Johannes race in for a try under the sticks and a minute later, Johan Grobbelaar scored on the same spot, both converted by Goosen to draw scores level in a flash.

After 65 minutes of to and fro and some glimpses of class, Goosen stepped inside some defenders and fed his halfback partner who ran in untouched. 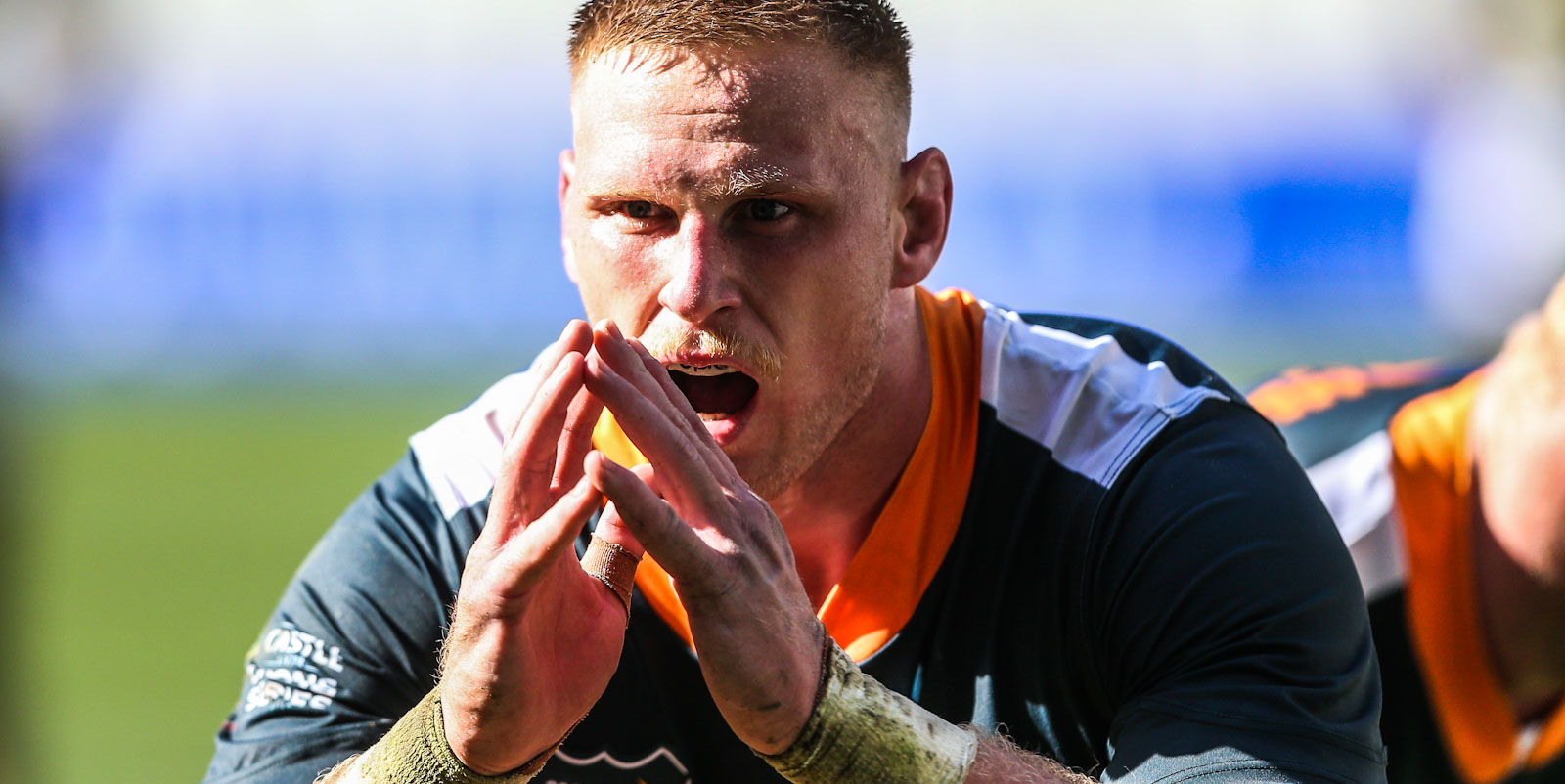 Jean-Luc du Preez ready for yet another lineout take.

The Johannes try gave some meaning to the game, and certainly sparked the interest of Goosen, who sniffed out the opportunity like an experienced pivot.

From the restart, Goosen again saw a gap in the tiring SA 'A'-side defence and put Muller Uys through at full speed. The big flanker ran strongly and the Vodacom Bulls distributed nicely out to the wing, where FC du Plessis found himself trapped against the touchline, but a clever kick infield was gathered by Grobbelaar who ran in without a green jersey in sight.

Goosen kicked the conversion and suddenly it was all square with 10 minutes to play, which is how it stayed until Smith landed the bomb that earned Jacques Nienaber a first defeat in green and gold as head coach.

The match reminded much of a typical SA derby in the early stages, although SA 'A' opted for lineout drives and not kicking to the poles. The Bulls repelled the first one, but conceded a penalty in the process and from the next drive erred again, but managed to stop the drive (illegally) again. This time SA 'A' opted for a scrum, but the men from Pretoria were rewarded a penalty when Coenie Oosthuizen lost his bind. 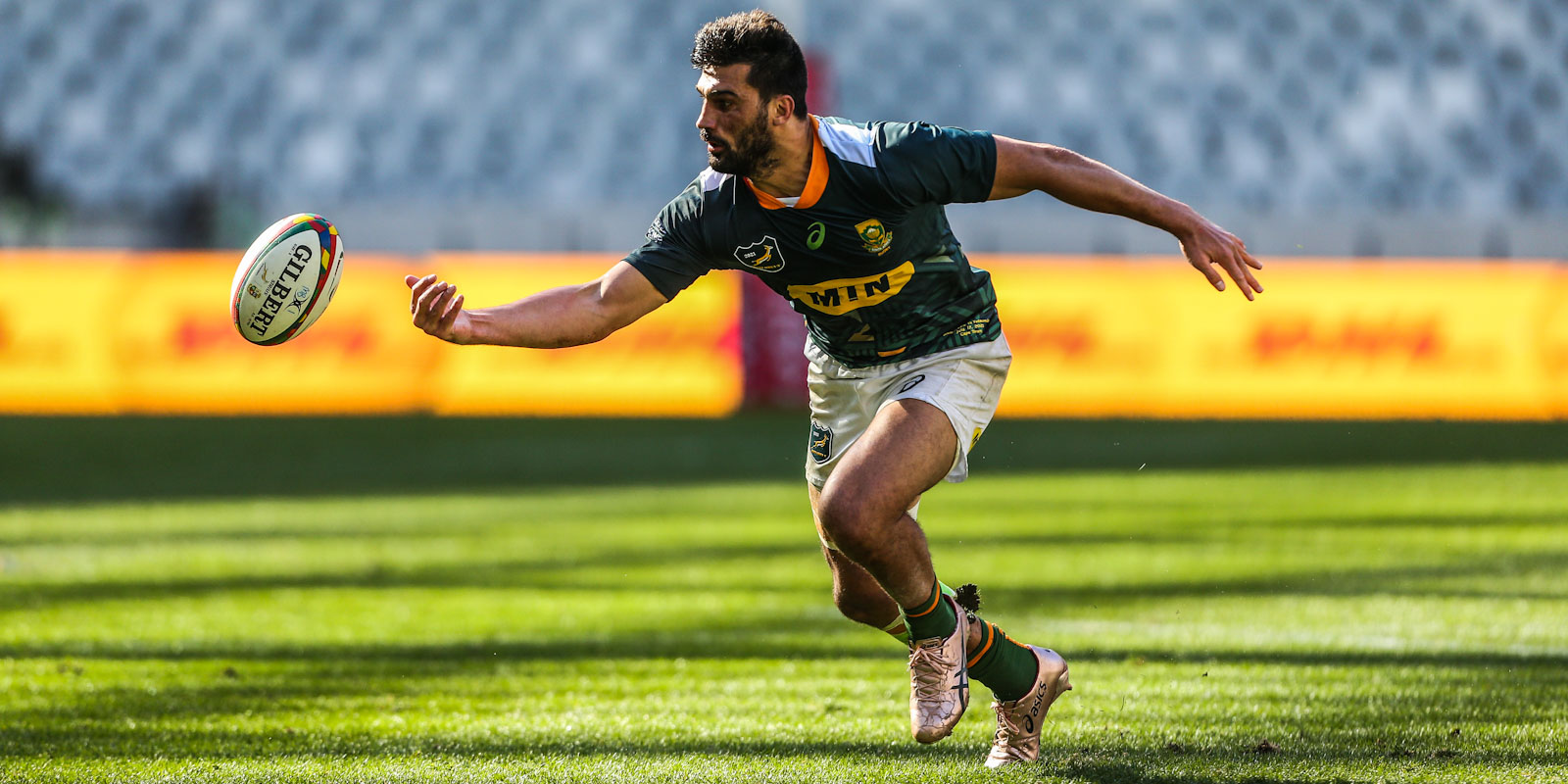 That respite was short-lived however as SA 'A' caught the Vodacom Bulls defence napping, with Cobus Reinach delivering a sniping break to hand Aphelele Fassi an easy run in. Elton Jantjies converted from right in front to hand his team a 7-0 lead 12 minutes in.

It did not deliver any points though and the men in green and gold could escape without conceding.

Both teams showed little ambition to carry the ball in the early stages, but the game opened up midway through the first half, with both sides starting to use their backs to gain territory. Tight defence reigned though and it became a slugfest of rucks and big hits.

The second try of the match came just before halftime, with Simelane getting his five pointer. The midfielder had to thank a number of good runs by a rash of ball-carriers, as the SA 'A'-side seemed to find some patience on attack and a willingness to work off the ball.

They stretched the Bulls defence till Simelane could eventually just drop over the line without a defender in sight to stop him.

The second half, bar some exciting runs by Rosko Specman on the wing for SA 'A', will be remembered for the Vodacom Bulls' comeback.

South Africa ‘A’ and the Vodacom Bulls will join the action of the Castle Lager Lions Series, as SA Rugby confirmed an epic double-header at Cape Town Stadium on Saturday, with the match between the DHL Stormers and the British & Irish Lions taking place later at the same venue in the Mother City.

Springbok coach Jacques Nienaber made wholesale changes to South Africa ‘A’ for their clash against the Vodacom Bulls at Cape Town Stadium on Saturday, with flyhalf Elton Jantjies leading the squad that features nine Rugby World Cup winners.

"We’re only a rugby team; we don’t have any real power or authority; there’s no reason why anyone should listen to us or follow what we say. We’re just ordinary South Africans like you. And, like you, we’re hurting.

Border back on top in Women's Premier Division

The Border Ladies, spearheaded by a magnificent Lusanda Dumke, outplayed DHL Western Province 24-15 in a pulsating Women’s Premier Division final in Cape Town on Friday, upsetting the defending champions and claiming the most valuable prize in local women's rugby for the first time since 2016.

The industrious Nizaam Carr will lead an exciting Vodacom Bulls side against South Africa ‘A’ in Cape Town on Saturday, with Johan Goosen named at flyhalf for his debut in the light blue jersey.

Kwagga Smith and Cobus Reinach said the Springboks knew what they had to work on and were ready to sharpen up as they prepare for the Test matches against the British & Irish Lions starting next Saturday in Cape Town.

Springbok Sevens coach, Neil Powell, has been admitted to an isolation facility in Kagoshima after he tested positive for COVID-19 on Saturday.

The Carling Currie Cup returns with a bang on Wednesday, with a double-header of Premier Division action scheduled as the halfway mark of the competition comes into view, while the match scheduled for Durban has been cancelled.

Boks will be ready for opening Test against Lions

Springbok flyhalf Handré Pollard and assistant coach Mzwandile Stick said the team would be ready for the opening Test of the Castle Lager Lions Series against the British &Irish Lions at Cape Town Stadium on Saturday as the historic tour reaches the business end.

Bok milestone for Pollard in opener against Lions

Handré Pollard will earn his 50th cap in the momentous opening Test between the Springboks and the British & Irish Lions at the Cape Town Stadium on Saturday – the first of three internationals between the two sides in the Castle Lager Lions Series.

South Africa ‘A’ and the Vodacom Bulls will join the action of the Castle Lager Lions Series, as SA Rugby confirmed an epic double-header at Cape Town Stadium on Saturday, with the match between the DHL Stormers and the British & Irish Lions taking place later at the same venue in the Mother City.

Kwagga Smith and Cobus Reinach said the Springboks knew what they had to work on and were ready to sharpen up as they prepare for the Test matches against the British & Irish Lions starting next Saturday in Cape Town.