SA Rugby celebrated International Women's Day on Tuesday with the news that the Springbok Women’s Sevens team has been invited to play in France later this year, giving further impetus to the increasing prominence of women in rugby in South Africa – not only in ever-growing playing numbers and participation statistics, but also in leadership roles in the game on a global scale, and more broadcast exposure.

The women's game in South Africa is under the spotlight in 2022, with the game’s strategic importance to SA Rugby underlined recently by Director of Rugby Rassie Erasmus, as both the Springbok Women and Springbok Women's Sevens teams are preparing for Rugby World Cups later this year.

The news of World Rugby’s invitation to the Springbok Women’s Sevens team – who will now join the Blitzboks at the HSBC Toulouse Sevens from 20 to 22 May – was received with great enthusiasm. It will be their first World Series tournament abroad since Dubai in 2018.

“This is a great boost to our squad and wonderful news on a day that we celebrate women the world over,” said Paul Delport, coach of the Springbok Women’s Sevens team.

“Playing in France will provide us with a good reality check of where we are after two years of not playing and importantly, will be crucial in our preparations for the Rugby World Cup Sevens in Cape Town.”

The Springbok Women's Sevens team will be in action in the HSBC Toulouse Sevens in May.

“We have a clear vision to get our Springbok Women's Sevens team back as a core team on the World Series and this is a very positive step for us towards that goal. It also adds another high-quality tournament to our schedule for the season, something we need after two years of not being able to play.”

Last week, Erasmus confirmed the elevated status of the Springbok Women’s teams, adding that that it was imperative for the women's game to be run by women, and also stressed that the game had to be made more accessible to younger girls who love rugby.

Wider exposure and interest will be pushed by the fact that both South African national women's teams will play in their respective Rugby World Cups this year.

SA Rugby is also organising a string of Test matches in the lead-up to the Springbok Women’s trip to New Zealand, with confirmation expected in due course as COVID regulations are being lifted globally. 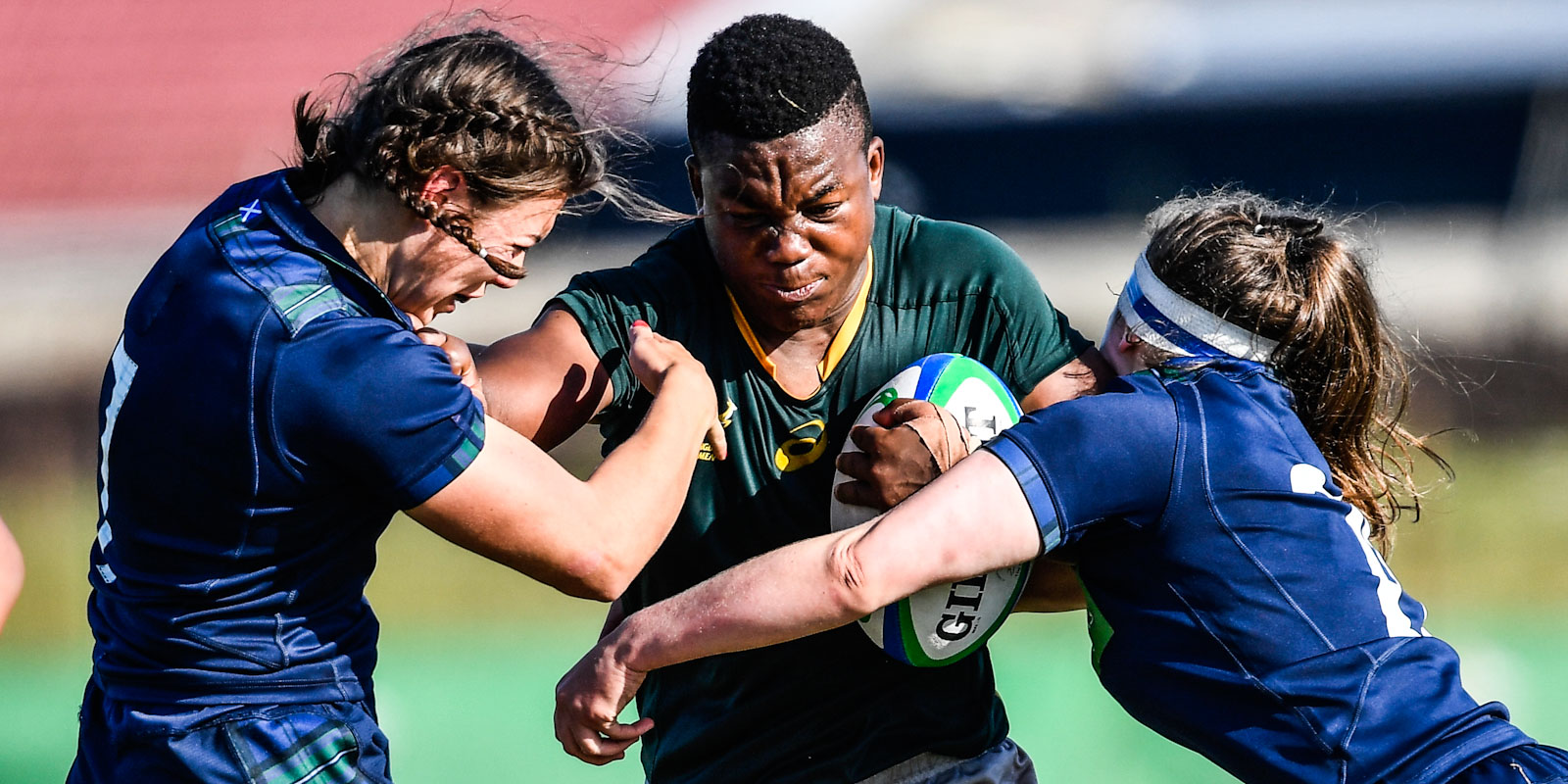 Babalwa Latsha in action against Scotland in 2018.

This will include two African Cup matches hosted in South Africa, with SuperSport confirming that those Tests will be broadcast, giving even more exposure to the women’s game.

The close collaboration between the men’s and women’s teams has already proved very productive, with Springbok forwards coaches Deon Davids and Daan Human conducting scrum and lineout sessions in recent weeks, while former Springbok flyhalf Braam van Straaten, who has been brought in as kicking consultant, recently concluded a kicking camp with the Springbok Women.

The Springbok Women’s Sevens’ charge towards the RWC Sevens in Cape Town was boosted with recent confirmation of South Africa’s participation in Rugby Africa's Sevens Championship in Tunisia at the end of April, after which they will travel to France for the HSBC Toulouse Sevens in May.

Two of the country's leading referees have also been confirmed on World Rugby panels. SA Rugby's Referee of the Year for 2021, Aimee Barrett-Theron, is on the Six Nations panel – her fourth appearance at the prestigious tournament – and will referee the clash between France and Ireland on 2 April, while Ashleigh Murray-Pretorius is flying the South African flag in the HSBC World Rugby Sevens Series.

All of this is aligned with World Rugby’s Women in Rugby plan, for growing sustainable participation across all facets of the game and creating pathways for more women to hold technical roles in rugby, including match officiating. 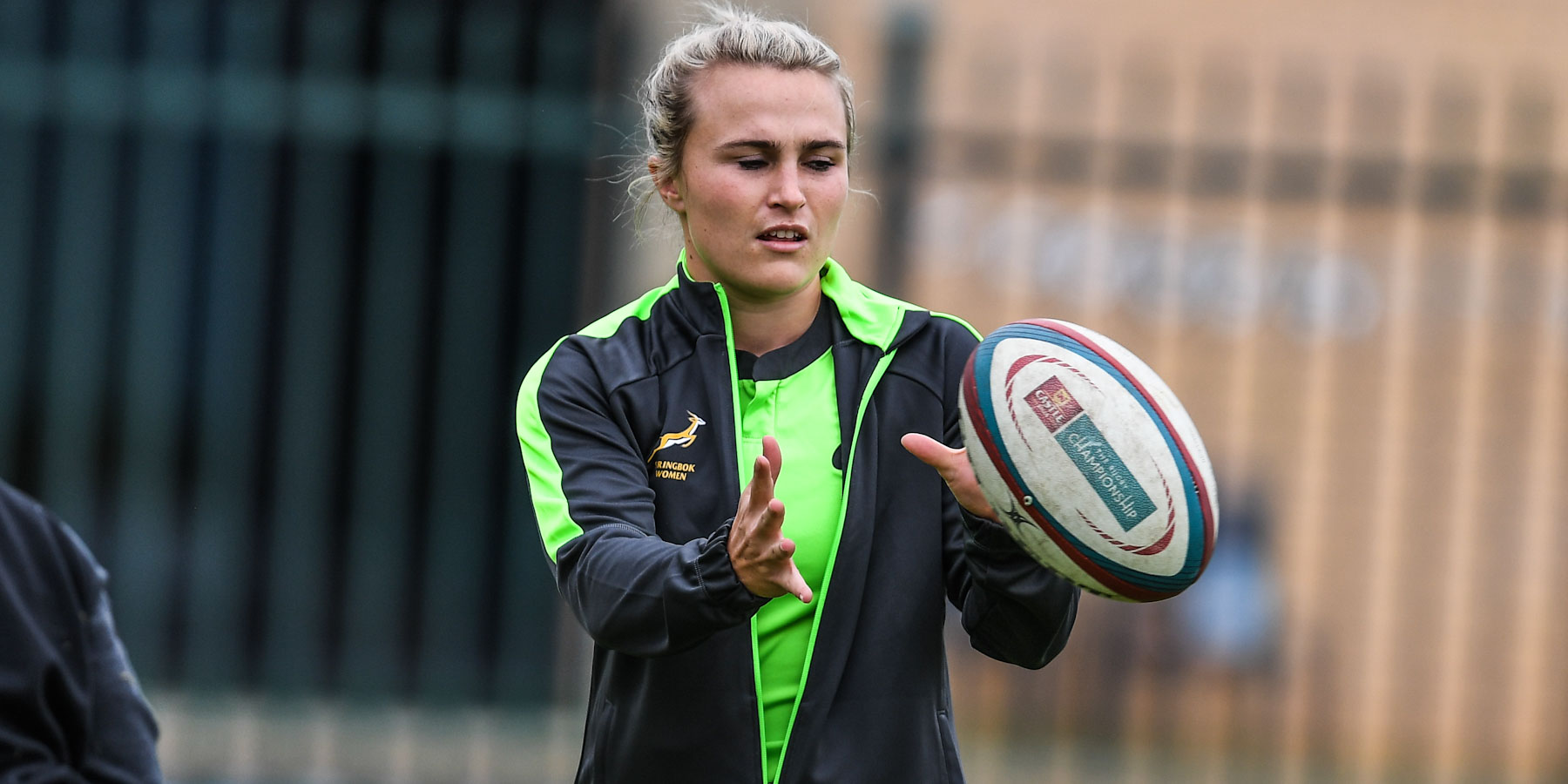 Rumandi Potgieter made her Test debut in 2021.

Last week, Cantwell pointed to an expanded eight-team Women's Premier Division, which will include the Mastercard Golden Lions for the first time, as well as a new coaching development pathway, supported by Betway. The emergence of women coaches has been earmarked as an important growth area of the game.

Dual Springbok international, Babalwa Latsha – who represented South Africa at the 2018 Rugby World Cup Sevens and will be hoping to add to her 11 test caps leading into the Rugby World Cup in New Zealand – was excited with all the developments.

“It is a massive year for women’s rugby and the heartfelt words of our Director of Rugby means so much,” said Latsha. “The women’s voice in rugby is an important one and we need to drive this effort and show that rugby is indeed a game for women too.”

Latsha, who holds a LLB degree, also shared inspirational words on behalf of the team, saying: “We at the Springbok Women would like to wish ladies all over the world a happy International Women’s Day and thank you for being courageous and giving us as young women the courage to pursue our dreams with valour and passion.”

Springbok scrumhalf Rumandi Potgieter, who is in the process of completing a Masters degree in International Law, said there was good reason for women to celebrate their involvement in rugby.

“It is a good way to celebrate International Women’s Day knowing that we have a voice in the game and support off it as well. It is the year of breaking the bias in the game and we fully support that,” she said.

The Springbok Women’s Sevens team, who finished seventh at the Commonwealth Games in Birmingham, will now turn their att...

Selection for the Junior Springbok Women will be one of the many rewards on offer to the country's leading Under-20 play...

Breakthrough win in Japan confidence booster for B...

Their historic first Test victory on foreign soil – and a first win over Japan – in Kumagaya on Saturday has boosted the...

SA Women's Sevens finish on a high in Birmingham...

The Springbok Women's Sevens team saved their best for last to claim seventh place at the Commonwealth Games 2022 in Bir...

Munster, fresh off a big win last weekend, lead the charge with three other Northern Hemisphere Vodacom United Rugby Championship contenders heading to South Africa this week for their first forays into the Southern Hemisphere.

Mr Mark Alexander, President of SA Rugby, congratulated the six nominees from rugby in seven categories of the 15th annual SA Sport Awards that were announced on Saturday.

Lions and WP surge forward in Under-20 Cup

The defending SA Rugby Under-20 Cup champions, the Lions, and DHL Western Province recorded hard-fought victories this weekend to ensure they stay at the right side of the log, while Toyota Free State started their campaign with a big win.

There wasn’t much movement at the top of the Carling Currie Cup standings, but the Toyota Cheetahs, Cell C Sharks and Vodacom Bulls started putting some daylight between them and the chasing bunch with good victories this weekend.

‘Genius’ Am scoops Player of the Month award

The Vodacom United Rugby Championship has been the perfect platform for Springbok talisman and Cell C Sharks captain Lukhanyo Am to again underline his status as one of world rugby’s best centres when he was voted the competition’s Player of the Month for February.

Kolisi to captain Sharks against Scarlets

Fireworks are expected in Durban on Friday evening when Siya Kolisi will lead the Cell C Sharks against the Scarlets in the first Vodacom United Rugby Championship clash in South Africa featuring a team from Europe.

Shake-up on the cards as northern teams head south

The Vodacom United Rugby Championship log could see a big shake-up in the next few weeks as the Northern Hemisphere teams start heading south in six of the next seven rounds, which could give the South African sides exactly the boost they need to challenge for places in the top eight.

Springbok Women's Sevens coach Paul Delport opted from some continuity and experience alongside a rash of exciting new talent when he invited 14 players to their third conditioning camp of the season, to be held at Stellenbosch Academy of Sport from 11-17 March.

World Rugby confirmed on Thursday that the rankings from the 2020/21 HSBC World Rugby Sevens Series and 2019 Oceania Rugby Sevens Championship will be used to determine the men’s and women’s Oceania Rugby qualification for the 2022 Rugby World Cup Sevens 2022, to be hosted in Cape Town in September, as well as the Commonwealth Games in July.

Munster, fresh off a big win last weekend, lead the charge with three other Northern Hemisphere Vodacom United Rugby Championship contenders heading to South Africa this week for their first forays into the Southern Hemisphere.

‘Genius’ Am scoops Player of the Month award

The Vodacom United Rugby Championship has been the perfect platform for Springbok talisman and Cell C Sharks captain Lukhanyo Am to again underline his status as one of world rugby’s best centres when he was voted the competition’s Player of the Month for February.