It was heartbreak for the South Africans, who just failed to get any rhythm in the match and were stretched on defence, despite facing only six opponents for most of the 14 minutes of action.

Selvyn Davids got the Blitzboks on the board with a converted try in the second minute after a great run by Kurt-Lee Arendse, as they started very well to take a 7-0 lead.

An red card one minute later to Argentina's experienced Gaston Revol - for a dangerous tackle on Selvyn Davids - seemed to galvanise the South Americans as they took a 14-7 lead at the break courtesy of two tries by Marcos Moneta.

Their third try, by captain Santiago Alvarez, was scored midway through the second half.

Moments later the Blitzboks were given a chance after being awarded a penalty try and the Argentineans, who played with massive passion and composure, reduced to five with a yellow card, but they managed to win the restart, kick the ball out and win the game.

The Blitzboks only have themselves to blame for their unfortunate exit from medal contention according to team captain, Siviwe Soyizwapi.

“We never really got the opportunity to play with the ball and our plan was not implemented at all. Argentina came and forced their will and style of play on us, and we allowed it to happen,” admitted Soyizwapi.

“Our heads are down at the moment; we have let ourselves down. We made silly mistakes. We did not keep our standards.

“Our strength lies in the way we implement the game plan and play as a team. That did not happen against Argentina. Our arrows were not shooting in the same direction.”

Blitzbok assistant coach Renfred Dazel said the failure to adapt to the changed situation on the field also added to their woes.

“When they had six men, we wanted to go solo,” said Dazel.

“We started well and had them exactly where we wanted to, but when they were a man down, we tried individually to exploit that. We had to stay true to our plan, despite playing against six men. We just did not adapt to the way they changed the game once they lost a player.”

The South Africans will play Australia at 03h30 (SA time) on Wednesday, with the winner of that match contesting the fifth place final against the winner of the match between USA and Canada, the other two teams knocked out in the quarter-finals. 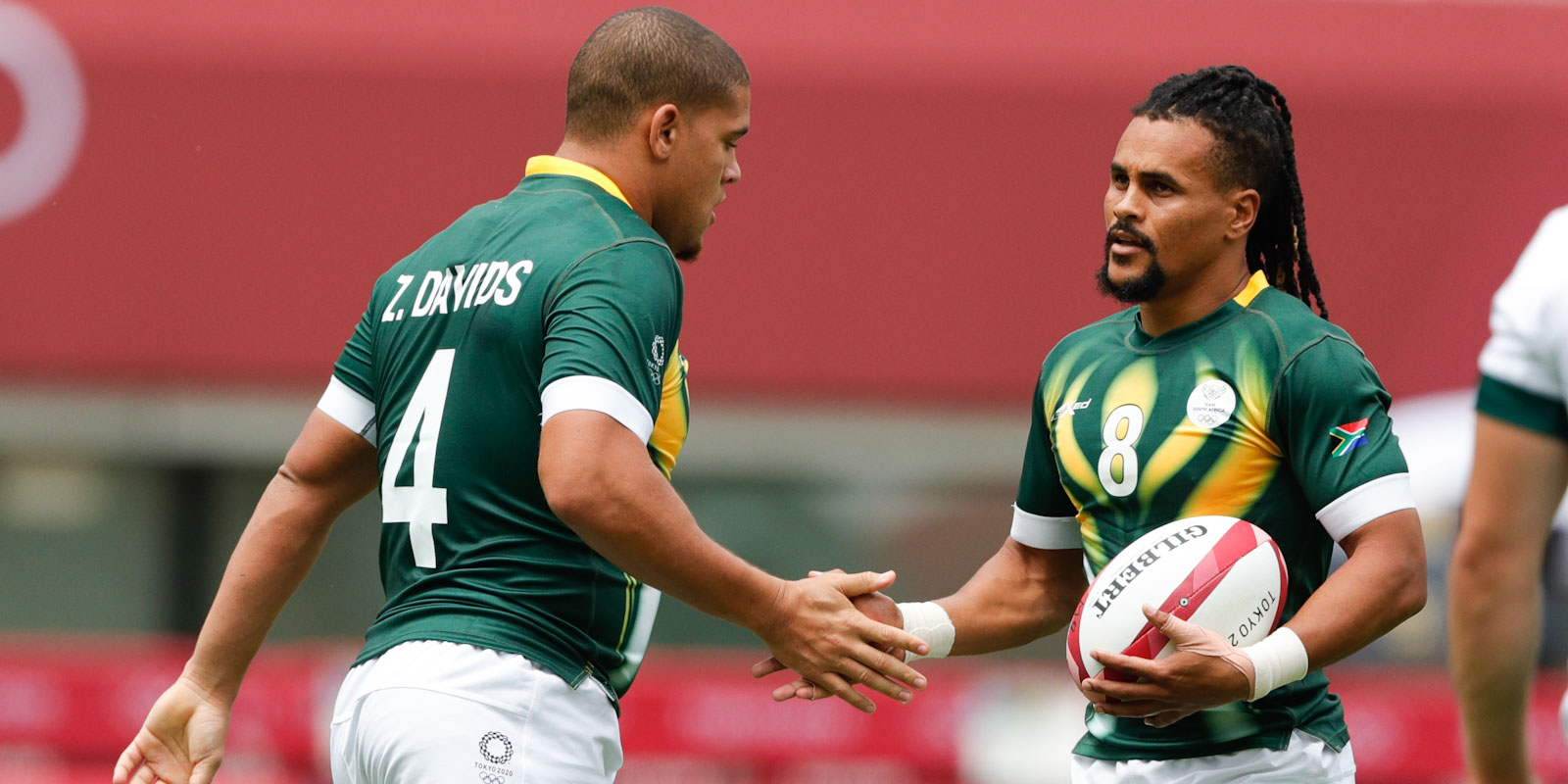 Selvyn Davids scored twice in the pool game against USA.

Earlier on Tuesday, South Africa progressed to a quarter-final against Argentina after finishing top of Pool C. The Blitzboks secured a clean sweep of their pool by beating USA 17-12, having secured 33-14 and 14-5 wins over Ireland and Kenya respectively on Monday. Argentina finished second in Pool B and on Tuesday easily outplayed South Korea in their final pool match.

New Zealand beat Canada in the last eight, with USA going down to Great Britain. Fiji played Australia in the fourth semi-final.

In their match against the USA, the South African defence held sway in a match that was played in a slight drizzle, impacting on the passing game of both teams. Their pressing defence when USA had the ball further complicated matters for the Americans, who made a number of errors under pressure.

The USA did make a fast start with a Joe Schroeder try, but were then bogged down in their half. South Africa did not release the choke chain and forced turnovers and penalties, with Selvyn Davids getting the first score, going over in the corner for a 5-5 score line at the break.

Davids then turned provider, racing Stedman Gans through a gap, with the outside centre scoring under the sticks for Davids to convert for a 12-5 lead.

The playmaker got his brace a minute later, opening a 17-5 gap on the Americans, who could not get their speedsters into the game.

Brett Thompson touched down under the posts to cut the USA’s deficit to five points after South Africa messed up a scrum, but it wasn’t enough to prevent defeat as the clock caught up with them.

The Springbok Sevens team must focus on their own standards and efforts and not worry about the team lined up on the oth...

JC Pretorius is hungry for success in Canada...

Shaun Williams was surprised when told that he would be travelling to Canada with the Springbok Sevens squad this week, ...

Mission accomplished for Blitzboks on first day in Tokyo

Wins over Ireland and Kenya pushed South Africa to the top of Pool C at the Rugby Sevens tournament at the 2020 Olympic Games in 2020 Games on Monday.

The Springboks will start the defence of their Castle Lager Rugby Championship title against Argentina, when they return to the Nelson Mandela Bay Stadium for the first time since 2018 in the opening two Tests of their 2021 campaign.

Boks determined to fix errors as they return to training

Springbok prop Steven Kitshoff and assistant coach Deon Davids emphasised the importance of correcting their mistakes and taking a big step up in all areas of their game as they returned to the training field on Monday to prepare for the second Test against the British & Irish Lions in Cape Town on Saturday.

The Cell C Sharks, Vodacom Bulls and DHL Western Province delivered commanding performances as all of them recorded victories with the Carling Currie Cup reaching its halfway stage this weekend.

Katleho Lynch and Cobus van Dyk have been handed the coaching reins of the South Africa Under-18 team for their tour to Georgia in August.

Boks gearing up for physical battle in second Test

Springbok centre Lukhanyo Am highlighted the physical battle and the importance of adapting to what happens on the field as the South Africans gear up for the second Test against the British & Irish Lions in Cape Town on Saturday.

Head over to TikTok for all the Lions Series action

As we head into the last few weeks of the Test series between South Africa and the British & Irish Lions, all Bok supporters are being called upon to dial up the gees and show their support for the Springboks in the last two games of the series.

Versatility not a burden for Damian Willemse

Damian Willemse is willing to step into any role required as the Springboks attempt to level the Castle Lager Lions Series and said they have everything to play for as the countdown continues to the crucial second Test against the British & Irish Lions on Saturday.

If the Carling Currie Cup Premier Division was a 4x100m relay race, the competition would now reach the second changeover as the home straight moves into sight with six games remaining before the playoffs.

Mission accomplished for Blitzboks on first day in Tokyo

Wins over Ireland and Kenya pushed South Africa to the top of Pool C at the Rugby Sevens tournament at the 2020 Olympic Games in 2020 Games on Monday.